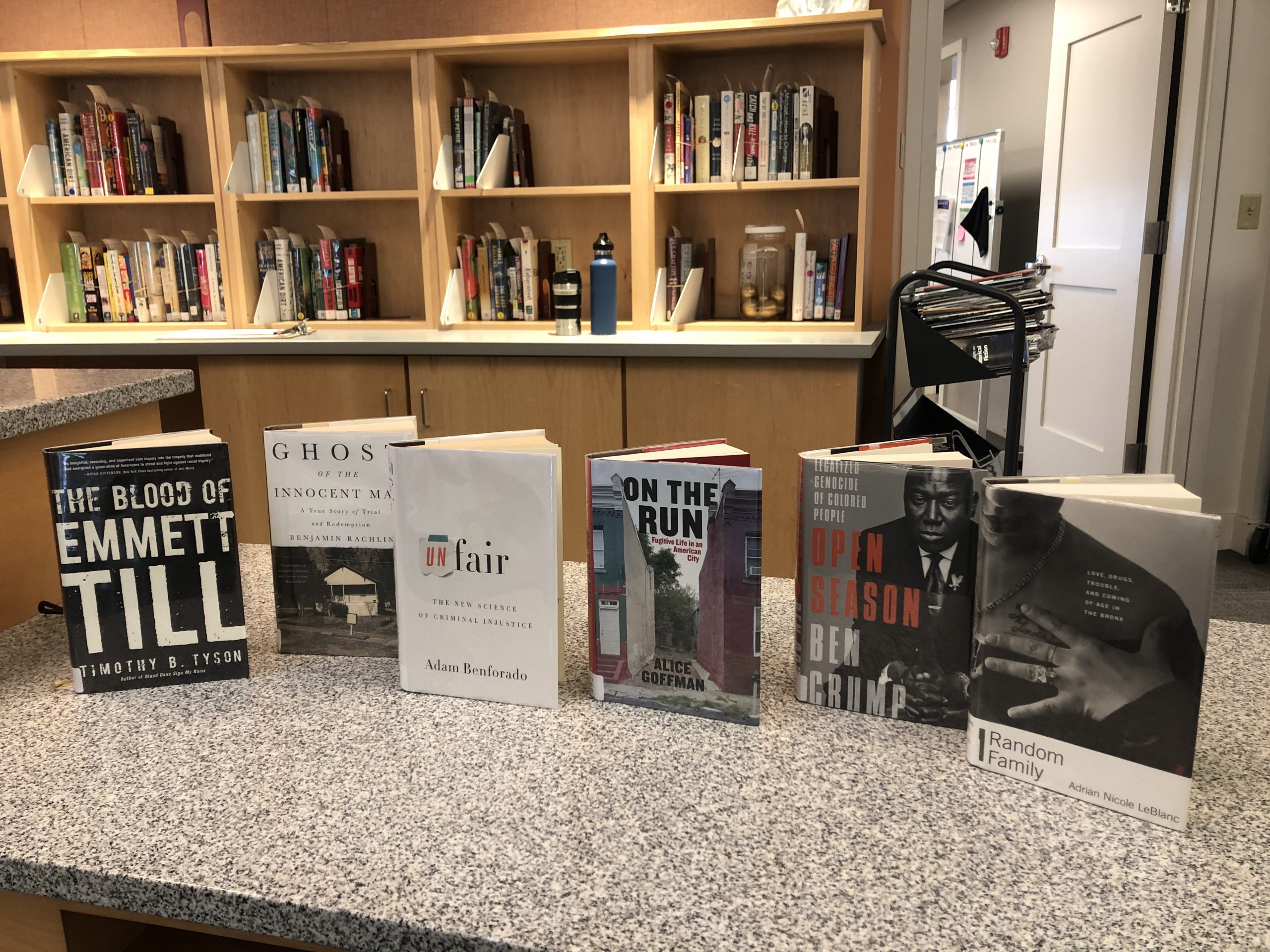 The Blood of Emmett Till

In 1955, white men in the Mississippi Delta lynched a fourteen-year-old from Chicago named Emmett Till. His murder was part of a wave of white terrorism in the wake of the 1954 Supreme Court decision that declared public school segregation unconstitutional. Only weeks later, Rosa Parks thought about young Emmett as she refused to move to the back of a city bus in Montgomery, Alabama. Five years later, Black students who called themselves “the Emmett Till generation” launched sit-in campaigns that turned the struggle for civil rights into a mass movement. Till’s lynching became the most notorious hate crime in American history.

But what actually happened to Emmett Till—not the icon of injustice, but the flesh-and-blood boy? Part detective story, part political history, The Blood of Emmett Till “unfolds like a movie” (The Atlanta Journal-Constitution), drawing on a wealth of new evidence, including a shocking admission of Till’s innocence from the woman in whose name he was killed.

Ghost of the Innocent Man: A True Story of Trial and Redemption

A gripping account of one man's long road to freedom that will forever change how we understand our criminal justice system.

During the last three decades, more than two thousand American citizens have been wrongfully convicted. Ghost of the Innocent Man brings us one of the most dramatic of those cases and provides the clearest picture yet of the national scourge of wrongful conviction and of the opportunity for meaningful reform.

When the final gavel clapped in a rural southern courtroom in the summer of 1988, Willie J. Grimes, a gentle spirit with no record of violence, was shocked and devastated to be convicted of first-degree rape and sentenced to life imprisonment. Here is the story of this everyman and his extraordinary quarter-century-long journey to freedom, told in breathtaking and sympathetic detail, from the botched evidence and suspect testimony that led to his incarceration to the tireless efforts to prove his innocence and the identity of the true perpetrator. These were spearheaded by his relentless champion, Christine Mumma, a cofounder of North Carolina's Innocence Inquiry Commission. That commission -- unprecedented at its inception in 2006 -- remains a model organization unlike any other in the country, and one now responsible for a growing number of exonerations.

With meticulous, prismatic research and pulse-quickening prose, Benjamin Rachlin presents one man's tragedy and triumph. The jarring and unsettling truth is that the story of Willie J. Grimes, for all its outrage, dignity, and grace, is not a unique travesty. But through the harrowing and suspenseful account of one life, told from the inside, we experience the full horror of wrongful conviction on a national scale. Ghost of the Innocent Man is both rare and essential, a masterwork of empathy. The book offers a profound reckoning not only with the shortcomings of our criminal justice system but also with its possibilities for redemption.

A child is gunned down by a police officer; an investigator ignores critical clues in a case; an innocent man confesses to a crime he did not commit; a jury acquits a killer. The evidence is all around us: Our system of justice is fundamentally broken.  But it’s not for the reasons we tend to think, as law professor Adam Benforado argues in this eye-opening, galvanizing book. Even if the system operated exactly as it was designed to, we would still end up with wrongful convictions, trampled rights, and unequal treatment. This is because the roots of injustice lie not inside the dark hearts of racist police officers or dishonest prosecutors, but within the minds of each and every one of us. This is difficult to accept. Our nation is founded on the idea that the law is impartial, that legal cases are won or lost on the basis of evidence, careful reasoning and nuanced argument. But they may, in fact, turn on the camera angle of a defendant’s taped confession, the number of photos in a mug shot book, or a simple word choice during a cross-examination. In Unfair, Benforado shines a light on this troubling new field of research, showing, for example, that people with certain facial features receive longer sentences and that judges are far more likely to grant parole first thing in the morning.  Over the last two decades, psychologists and neuroscientists have uncovered many cognitive forces that operate beyond our conscious awareness. Until we address these hidden biases head-on, Benforado argues, the social inequality we see now will only widen, as powerful players and institutions find ways to exploit the weaknesses of our legal system.   Weaving together historical examples, scientific studies, and compelling court cases—from the border collie put on trial in Kentucky to the five teenagers who falsely confessed in the Central Park Jogger case—Benforado shows how our judicial processes fail to uphold our values and protect society’s weakest members. With clarity and passion, he lays out the scope of the legal system’s dysfunction and proposes a wealth of practical reforms that could prevent injustice and help us achieve true fairness and equality before the law.

On the Run: Fugitive Life in an American City

Forty years in, the War on Drugs has done almost nothing to prevent drugs from being sold or used, but it has nonetheless created a little-known surveillance state in America’s most disadvantaged neighborhoods. Arrest quotas and high-tech surveillance techniques criminalize entire blocks, and transform the very associations that should stabilize young lives―family, relationships, jobs―into liabilities, as the police use such relationships to track down suspects, demand information, and threaten consequences.Alice Goffman spent six years living in one such neighborhood in Philadelphia, and her close observations and often harrowing stories reveal the pernicious effects of this pervasive policing. Goffman introduces us to an unforgettable cast of young African American men who are caught up in this web of warrants and surveillance―some of them small-time drug dealers, others just ordinary guys dealing with limited choices. All find the web of presumed criminality, built as it is on the very associations and friendships that make up a life, nearly impossible to escape. We watch as the pleasures of summer-evening stoop-sitting are shattered by the arrival of a carful of cops looking to serve a warrant; we watch―and can’t help but be shocked―as teenagers teach their younger siblings and cousins how to run from the police (and, crucially, to keep away from friends and family so they can stay hidden); and we see, over and over, the relentless toll that the presumption of criminality takes on families―and futures.While not denying the problems of the drug trade, and the violence that often accompanies it, through her gripping accounts of daily life in the forgotten neighborhoods of America's cities, Goffman makes it impossible for us to ignore the very real human costs of our failed response―the blighting of entire neighborhoods, and the needless sacrifice of whole generations.

As seen on CBS This Morning, award-winning attorney Ben Crump exposes a heinous truth in Open Season: Whether with a bullet or a lengthy prison sentence, America is killing black people and justifying it legally. While some deaths make headlines, most are personal tragedies suffered within families and communities. Worse, these killings are done one person at a time, so as not to raise alarm. While it is much more difficult to justify killing many people at once, in dramatic fashion, the result is the same—genocide.

Taking on such high-profile cases as Trayvon Martin, Michael Brown, and a host of others, Crump witnessed the disparities within the American legal system firsthand and learned it is dangerous to be a black man in America—and that the justice system indeed only protects wealthy white men.

In this enlightening and enthralling work, he shows that there is a persistent, prevailing, and destructive mindset regarding colored people that is rooted in our history as a slaveowning nation. This biased attitude has given rise to mass incarceration, voter disenfranchisement, unequal educational opportunities, disparate health care practices, job and housing discrimination, police brutality, and an unequal justice system. And all mask the silent and ongoing systematic killing of people of color.

Open Season is more than Crump’s incredible mission to preserve justice, it is a call to action for Americans to begin living up to the promise to protect the rights of its citizens equally and without question.

Random Family: Love, Drugs, Trouble, and Coming of Age in the Bronx

In her extraordinary bestseller, Adrian Nicole LeBlanc immerses readers in the intricacies of the ghetto, revealing the true sagas lurking behind the headlines of gangsta glamour, gold-drenched drug dealers, and street-corner society. Focusing on two romances—Jessica’s dizzying infatuation with a hugely successful young heroin dealer, Boy George, and Coco’s first love with Jessica's little brother, Cesar—Random Family is the story of young people trying to outrun their destinies. Jessica and Boy George ride the wild adventure between riches and ruin, while Coco and Cesar stick closer to the street, all four caught in a precarious dance between survival and death. Friends get murdered; the DEA and FBI investigate Boy George; Cesar becomes a fugitive; Jessica and Coco endure homelessness, betrayal, the heartbreaking separation of prison, and, throughout it all, the insidious damage of poverty.Charting the tumultuous cycle of the generations—as girls become mothers, boys become criminals, and hope struggles against deprivation—LeBlanc slips behind the cold statistics and sensationalism and comes back with a riveting, haunting, and true story.