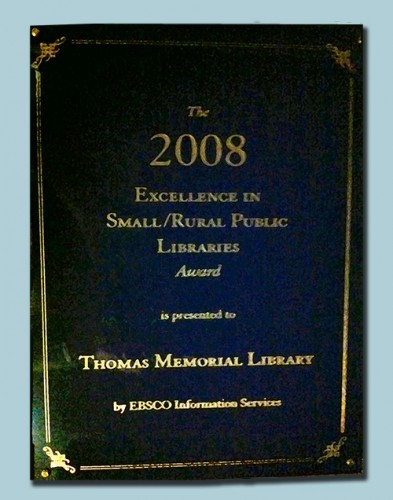 The award is given annually by the Public Library Association to a public library that serves a population of 10,000 or less. Only one library in the United States is chosen each year. To win the award, the library must have demonstrated excellence of service to its community as exemplified by an overall service program or a special program of significant accomplishment.

Children’s Librarian Rachel Davis received a plaque and a $1,000 honorarium at the American Library Association National Conference in Anaheim, California on June 30, 2008.

Davis submitted the winning application for the library’s Lonely Books Club, an original program designed to encourage children to read award-winning or otherwise notable children’s books in the library’s collection that no longer circulate.

The program, sponsored by the Rotary Club of South Portland-Cape Elizabeth, began in April of 2007 and continued until the funding was expended in 2009. Children in grades 3 and up were invited to join the club. Members are asked to read books from a list of more than 400 “Lonely Books” — works of children’s fiction that had not circulated more than two times in the last five years. Many of these books had won awards or have been featured on “Best Books for Children” lists, but because their covers were worn or they appeared outdated, children did not choose to read them on their own.

More than two-thirds of the books on the Lonely Books list were read as a result of the program.

The club attracted over 100 active members ranging in age from 7 to 14. Club members developed a new appreciation for the books, many providing comments on evaluations such as, “I learned not to judge a book by its cover…what do you know, these books were pretty great!” or “I looked at books that seemed boring but then I read them and found out that they weren’t so boring.”  Meetings were held monthly for club members to discuss the books they read and share recommendations with others.

The program was supported enthusiastically by the Rotary Club of South Portland-Cape Elizabeth upon receiving the library’s grant proposal in early 2007. Promoting literacy worldwide has been a focus for Rotary International. The local club was gratified that  that the Lonely Books Club began to be replicated in other communities around Maine and the country as a result of the Thomas Memorial Library providing resources, materials and advice to any interested libraries.

Children participating in the Lonely Books Club wrote brief reviews about the books they read, and rated them.  You can read the archive of the reviews they submitted back in 2007 – 2009.

Press coverage of this award: