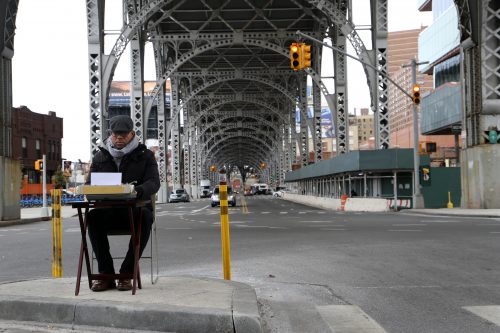 In a Whole New Way: New Yorkers on Probation Photograph Their World
On Display: February & March 2022

Participatory photography is a practice which empowers marginalized individuals to take charge of their own public narrative by documenting their lives authentically. Turning traditional photojournalism on its head, participatory photography counters prevailing negative media stereotypes that undermine human dignity. The first such initiative by the New York nonprofit Seeing for Ourselves led to the publication of Project Lives: New York Public Housing Residents Photograph Their World. The success of this effort led the city to ask Seeing for Ourselves to conduct a similar program for New Yorkers on probation.

In a Whole New Way: Undoing Mass Incarceration by a Path Untraveled, the book resulting from this new effort, was drafted at the Thomas Memorial Library in 2019, by a Seeing for Ourselves official based in Cape Elizabeth. In a Whole New Way, the accompanying award-winning short documentary—written and directed by the same official—was fine-tuned during the summer of 2020 in TML’s Writers’ Accountability Group.

This exhibit will be on display at the library throughout February and March 2022. Join us for an exclusive screening of the documentary In a Whole New Way via Zoom on February 17 at 7:00pm. A panel discussion with the filmmakers and Maine public officials working in the justice system will follow the film. In addition to the filmmakers from Seeing for Ourselves, we’ll be joined by Cumberland County District Attorney Jonathan Sahrbeck, Assistant District Attorney Nicole Albert, and Christopher Arbour, probation officer with the Maine Department of Corrections. They will discuss how this initiative can help curb both mass probation and mass incarceration in our country.

Click here for more info and to register for this event.